I really hate it when I get behind on my blog. I’ve become a blog junkie, and find it almost impossible to catch up on lost time, and then I have to wonder what have I not recorded from years past.
I’m going to play some catchup here, and try and summarize the trip after Danny got here, he must be my distraction…
The day before Danny came which was Thursday July 17, I went with my Mom up to Sundance. I instantly fell in love with Sundance, almost as much as my obsession over Yosemite. The kids and I took a ski lift ride up the mountain, I’m not sure which mountain, but it was Ray’s lift. It went on forever, and well this will sound corney, but I understand the statement of a “natural high”. I called Danny from the lift, I was so wishing that he was with me. I knew that I’d have to bring him up there. 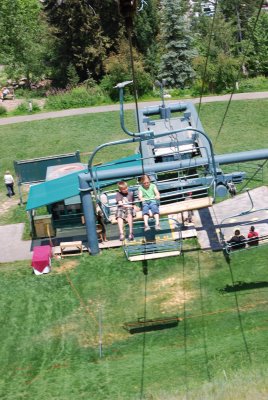 I took this picture from the seat in front of Emma and Tanner, it’s little off because I was trying to keep Alyssa from jumping… 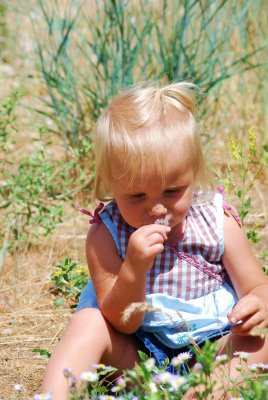 Alyssa loved the flowers, and the fact that I let her pick as many as she wanted. 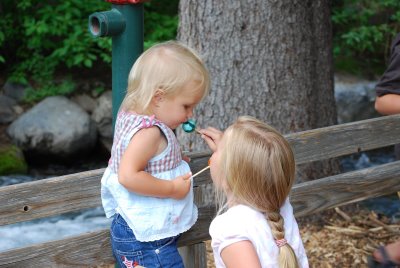 Grandma bought the kids suckers, they were delicious, they all wanted to try each others flavors there was a lot of spit swapping that day.

Danny flew to SLC on Friday night. I took the kids to the zoo on Friday morning, it was so stinking hot. How come when I was kid the heat didn’t bother me and neither did the stench. The zoo was always delightful when I was young, but I’ve lost my innocence, maybe I can’t hear bells ring at Christmas either. Why do lizards and snakes smell so horrid? And the birds… I’ve never been a bird fan, maybe it has something to do with my first job at a pet store changing the bird cages… NASTY. I was really just killing time until we could pick up Danny. Alyssa wouldn’t look at Danny for probably 15 minutes, it was pretty funny, she just avoided him, but then warmed up and forgave him for his absence. We went out to eat and then went and vistited with Mom and Dad before heading back to the apartment. 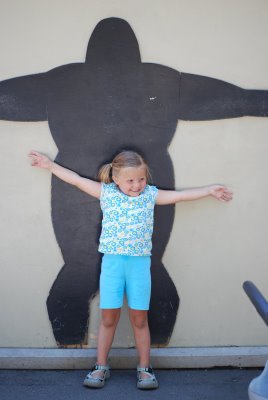 Aubrey comparing herself with the gorillas!

When we got up on Saturday morning we headed straight to Sundance. Danny agreed with me on the beauty of Sundance, now if we could only afford a home up there. He says it reminds him of Hatchers Pass in Alaska. Yes it is that beautiful. When I took the kids up there on Thursday we road the lift up and down, but with Danny there to help with the little kids we decided to take the hike down. It was 3.5 miles down the trail was small, and over grown with plants, but so worth the scrapes and scratches. We crossed multiple rivers, went across the middle of a waterfall and finally came to Stewart Falls. It was uncrowded because the hike to get there is a little brutal. You wont find that in Yosemite, the crowds just don’t go away there. Tanner and Emma both enjoyed standing in the waterfall, I was worried about the force of the water, but they faired well. Alyssa and Aubrey played at the base of the falls in the water. I should have taken more pictures, but a lot of the hike was cliff on one side and I didn’t feel like I could stop and take pictures. The wild flowers were abundant and the butterflies were everywhere, I tried my hand at some close up pictures of bugs, but they aren’t very photogenic and they kept flying away, the nerve. After a rest at Stewart Falls, we continued down the mountain. I lost Alyssa’s hat somewhere along the way…sigh, I loved that hat, it’s been a summer staple through multiple children, and I’m not sure if I will beable to find another one. 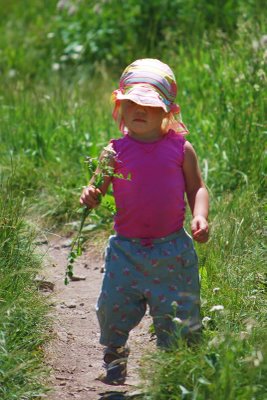 The last picture I’ll have of my favorite hat. The trail went through a nice meadow so we let Alyssa get out of the back pack and walk a little ways. She couldn’t wait to pick more flowers. 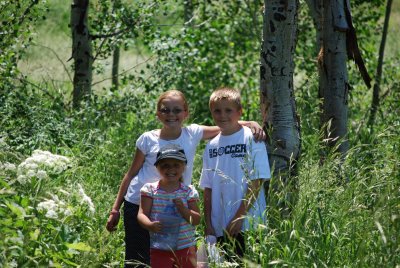 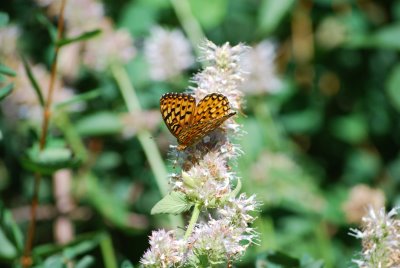 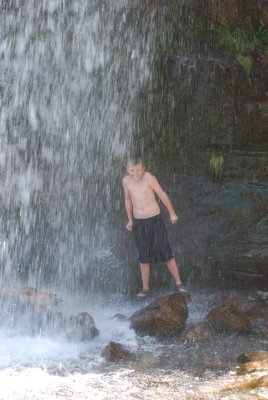 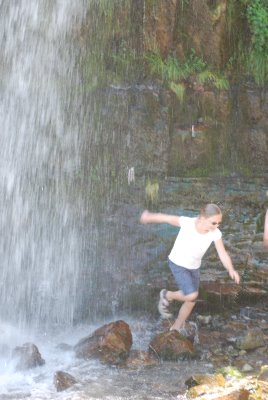 Well this brings me to the end, we spent the last week with Emma at Gymnastics camp. The camp met and exceeded all expectations, Emma is starting to out grow the camp though and will need to move on to the all day camp for higher level kids.
Tanner spent the first week of our trip at Soccer camp. He also had a great time I’ll post some pictures from
That also. 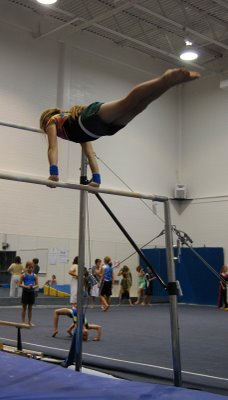 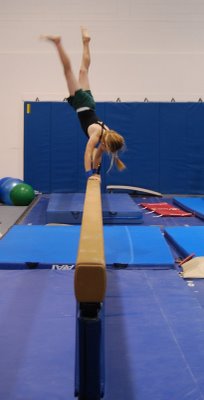 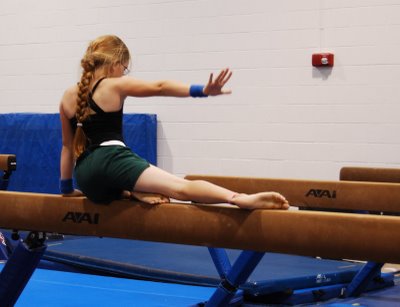 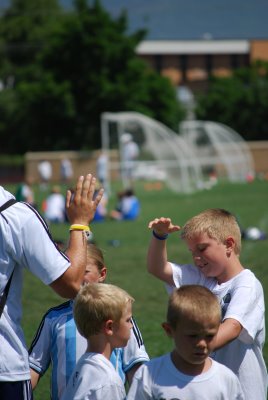 Tanner giving his coach a high five after scoring a goal! 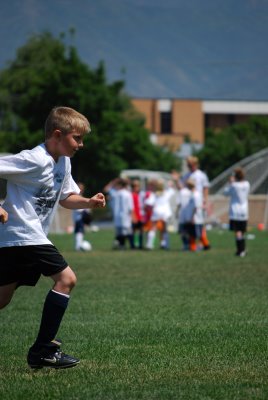 A large hot air balloon landed on the soccer field.
It’s so nice to be home. The kids enjoyed their time with Grandma and Grandpa, and miss them terribly. Thanks Mom and Dad for all your help and time we love you, and couldn’t have done it without you. We hope to see you soon at our place.
Let me say a little about the apartment that we rented. We had one bedroom, and Emma, Tanner, and Aubrey slept on an air mattress in the living room. They are having a hard time sleeping in their own beds again. We had one VERY small bathroom and that was about it. It worked, but it had its moments, I wanted to get pictures of it before I left but didn’t get a chance.
I think the kids grew closer together, and I saw many changes in all the kids. Emma has gained a new independence, she walked to the bakery with Tanner on occasions to buy muffins for breakfast, for Emma that was a big step. Alyssa picked up a huge vocabulary, she calls herself Issie and is now speaking in sentences mostly referring to herself. She says “that’s Issie’s blanket” of “Where Issie’s Tanner go” it’s very cute.
It’s nice to be home!!!

If you have daughters check this out!!! Interesting article