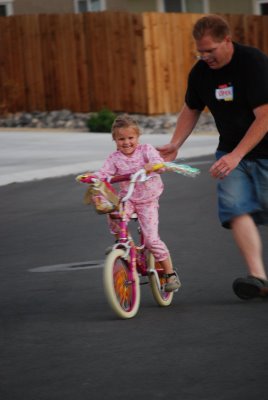 Emma’s birthday is in ten days, just ask her, and I’m sure she’ll know the exact hour/minute until her birthday, she’s been singing around the house for days now “I’m going to be ten!!”. With Aubrey’s birthday just passing, I decided that I needed to get birthday pictures done. There is a talented photographer in our ward, so I called her up and made the plan. It’s always very stressing to get ready for photographs so I decided to only do the two birthday girls and then in November when Tanner turns 8 and Alyssa 2 in December I’ll do a joint photo shoot for those two. It’s very frustrating I had both girls hair in hot rollers for 30 minutes and barely a curl happened, I put a lot of product in the hair hoping to help, but I just can’t get their hair to curl, it’s very thick and course, and it just wont happen, so why do I torture myself. Little girls are supposed to have curly hair I guess is how I see it. Anyway, their hair turned out ok in the end.
I stopped at a gas station and picked up some spicey mints, that would be Aubrey’s “price”. She will cooperate on just about anything if a spicey mint is involved, what a strange thing for a 4 year old to like, but it works. She’d request a mint occasionally when she was feeling the naughties coming on. Now I usually don’t bribe, but occasionally all of us need a reward, and it seemed like a small price to pay. Of course I picked up a bottle of water, if Aubrey thinks I’m not prepared with a drink, that will become an issue and I wasn’t wanting her to be constantly asking for a drink knowing that I can’t give her one. Aubrey was possivtivly delightful for the pictures though and I couldn’t have been more pleased. Emma of course was easy and took no bribing, she was just happy to play model.
If anyone wants to see a couple of pictures you can visit www.bluelakephotography.typepad.com

Thanks Lynda for doing this for me, you’re the best!!!