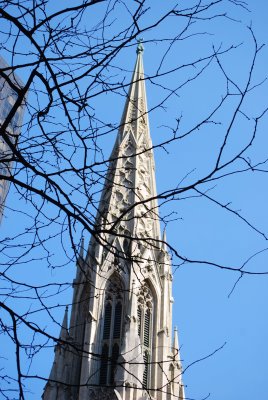 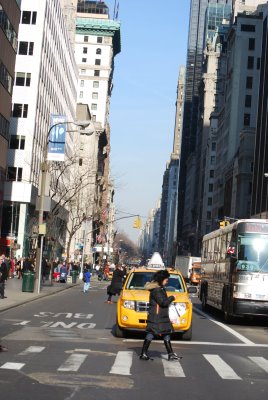 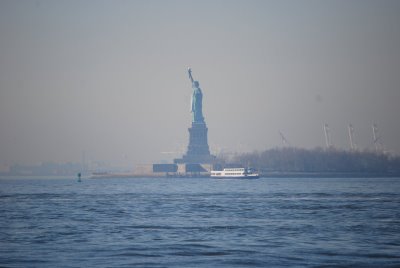 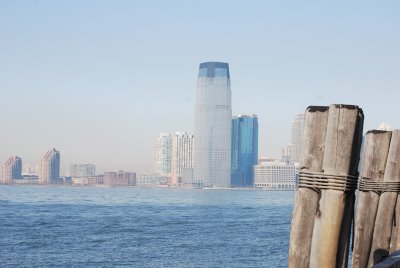 We flew out on Sunday morning for NYC. I was so sad to leave the kids. I knew they would be fine with my Mom and Dad, but I still felt like we were being irresponsible for leaving them. I tried hard to control my emotions, but I’m not sure I did such a great job. The flight was uneventful, which I was grateful for, but we did have to go into a holding pattern over JFK for about 40 minutes and that got a little old. (Danny’s note: We flew to Phoenix first, then changed planes. The flights were smooth, but very long…and then the landing at JFK was really rough. It felt like the pilot dropped us on the runway, then hit the brakes hard like I’ve never felt. The airport is under some construction, and we had a little bit of difficulty finding where to pick up our luggage. It took over an hour for them to get our bag down, and the handle was ripped off. Considering they charge $15 for every bag, I was even more irritated…)

Once we got our baggage, the company we were traveling for had arranged for a car service to pick us up. I’ve always wanted to have one of those guys in a suit holding a sign be for me. I would have taken a picture, but my camera was in my luggage. We were very late, but he was waiting there with a smile. (Danny’s note: When I got back to work today, there were multiple voice mails from the car service…had we been only a few more minutes, he might’ve left.) Driving in Manhattan is a talent and I was grateful for his talent. We arrived at The Essex House right on Central Park South, it was a great hotel in a great location. Can I just say I love door men! That is something we don’t have much of out here in the west, but that gentleman had our luggage out of the trunk, a receipt in our hand, and we were up to hotel check-in before we even knew what had happened.

The hotel room was great. What can I say, I’m not sure what the definition of art deco is, but that is what they call the decor in this hotel. I wouldn’t say it’s my favorite decor, but it was beautiful. We got into the hotel about dinner time, and I envisioned myself ordering room service for dinner and just really enjoying myself. I decided that I would be unable to enjoy myself while eating a $35 sandwich, and a $6 soda, not to mention the delivery fee and the tip that was required, times by 2. So Danny and I coated up and went for a walk in the neighborhood. We found a deli that was still open and we ordered great big sandwiches for $4, some fresh fruit, drinks and dessert. I got a meatball sandwich with big chunks of mozzarella. Danny got some weird sandwich with spicy chicken breast, avocado and watercress. We ate back in our hotel room. 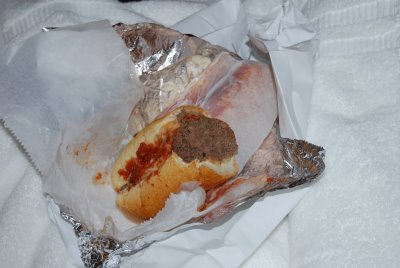 On Monday we had nowhere we had to be to except for a cocktail party that night at 7:30, so we set off to do some sight seeing. We did have to find Danny a dress shirt, he’d forgotten his white dress shirt. We went to the giant famous Macy’s, but no luck finding Danny’s size, his arms are really long. So we stumbled into this odd store called Conway’s, everything is cheap, and I figured there was no way we’d find what we were looking for there. There were lots of sleezy women clothes, really baggy men jeans, and gold chains. You could also get piercings 2 for $5. We found a rack with dress shirts for $5.99, and sure enough right there was his perfect size just waiting for us.

We took the subway down to the Battery Park to see the Statue of Liberty (we decided to avoid the tourist trap and not go all the way out there), and wandered our way up past the Manhatten LDS temple, stopped in at a four-story Borders Books, and eventually got all the way up the Museum of Natural History. We had to get a picture with Dum Dum from Night at the Museum for the kids. I was only wishing I’d had a piece of gum for Danny to hold up for the picture. I’m sure the people in the museum thought we were idiots, but oh well. We were really debating if it was worth the entry fee to the museum. We’d been to the Natural History Museum in D.C. just a few years earlier, but the entrance there was free, and we spent a lot of time inside. So when we got to the Museum there in NYC, the guard asked us if we were going to go in. We said probably not, it was getting late and we still had to dress for the party that night, and we were all gross from the day’s events. Then the guard said that the last hour was free–now how can you pass that up? So in we went. Our feet hurt so badly, but we ran from the top to the bottom seeing as much as we could and then headed back to the hotel. 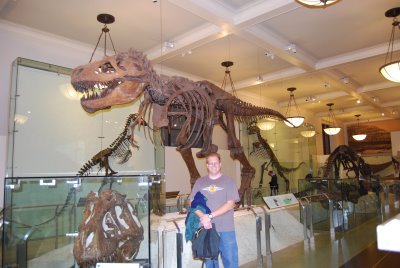 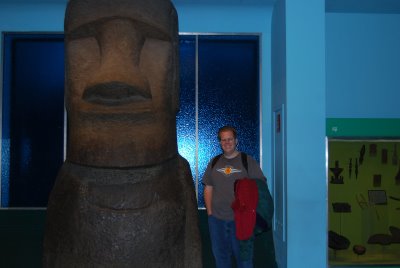 Now I’ve never been to a cocktail party, and I was feeling very nervous. We arrived at Trattoria Dell’Arte which is right across from Carnegie Hall. The place is decorated in a unique fashion. I’m assuming it must be chic since it had lots of large body pieces hanging on the wall. It really was f
un though, really large ears, lips etc… We were shown to a private party room and they were handing out drinks and horderves. I just felt like the whole thing was so surreal, so unlike my normal everyday life. I kept wondering how in the world I got there. The guests were arriving from all over the world. There was a reporter from Italy with quite the eccentric personality, and many large names that Danny recognized from many different technology publications. Danny felt quite honored to be included in this group of people who are considered experts in their fields. Danny was invited to speak with these people as a customer who was an expert and could tell the reporters and the investors from a user’s end of what this company does. I know I’m going into so many details but this is all so foreign to me, that I found every detail fascinating. I’m sure what I do would be as foreign to them, only not nearly as glamorous.
They had waiters walking around serving horderves–crab cakes, beef ca bobs, shrimp wrapped in cucumber slices, and many more. Danny and I got ourselves some Sprites, and were happy to see that there were others there that weren’t drinking either.

We sat for dinner at 8:30. Now I remember having manner classes in Young Woman’s, but I don’t remember them covering what to do with three different wine type glasses. Danny and I figured out pretty quickly which one was the water glass, but the other two… we weren’t sure of. I think by the end we figured out one was for white wine and one for red wine. We are such hicks sometimes. The other thing with the table configuration that I didn’t know what was for was two knives. There was a small plate with what was obviously a small butter knife, but then there were two other large type butter knifes. It’s all good though, everyone was having a good time, and no one really cared what everyone else was doing with their knives. They hired a guy for entertainment, he played the harmonica, and a guitar and sang great folky/country type songs. We watched him and after every song he switched harmonicas, we weren’t sure if it was from spit or if it different harmonica’s have different pitches. So many unimportant questions in life. Anyway, feeling like we’d better call our kids before bed we left the party and headed back to the hotel. I felt like I was some other person for the evening, so much fun. Oh did I mention how delicious the food was? It was really good, I was irritated that I’d eaten horderves and didn’t have much room for dinner. 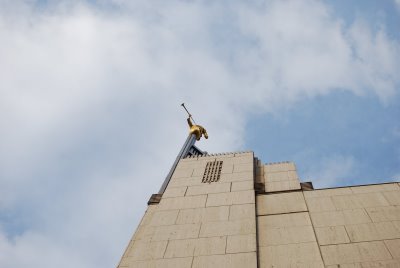 Tuesday was my day to do as I pleased. Danny had his meetings all day long and I was to meet him in the hotel lobby by 2:30 to catch our ride back to the airport. (See Danny’s blog at http://www.danobarrjr.net/2009/02/application-delivery-architect/ for more information about the geek stuff.) I was bummed, it was snowing and the wind was blowing, and it was a miserable kind of day. I didn’t do much, I really wanted to see a Broadway play but there were no matinees on Tuesday, so I walked down to Times Square, and then over to 5th avenue to do some shopping, and down to F.A.O. Swartz to look at kid things. I returned to the hotel early and just enjoyed the lobby and read a book sitting at a window seat overlooking Central Park. The snow was beautiful, as long as I was inside. Danny showed up and informed me that our plane was cancelled, and I panicked. My kids, I had told them I’d be home tonight, and my Mom had called earlier to tell me Aubrey was sick and I just wanted to get home to them. The company put us up in the hotel for another night, and we caught a flight out the next day. Danny and I wandered down to the temple to buy some underwear, and then stopped and picked up some dinner. Danny ended up going out with some people from the company that night, but I stayed home. My ankles were swollen, and I was stressed about the kids, and didn’t have anything else to wear, so I just enjoyed the hotel for another night. Maid service comes in around 7ish to turn down your bed, that I haven’t figured out yet either, why turn down my bed? I was asleep shortly after. Everything went as planned after that, and we returned home safely.

Danny’s note: In New York we saw almost no children. The only ones we did see were on the upper West side, as they call it. We kept thinking something was strange about them–then it dawned on us–most of the women were a different race from the kids. Guess if you live there, you have to have a nannie. We also noticed that everyone seemed to be so serious and in a hurry. Matter of fact, on Monday we had some fun torturing New Yorkers by making eye contact and smiling. They were so startled they almost dropped their Starbucks cups. I talked to my employee from New York, and he says we were right on–everyone is just so intent on surviving that they’re just frowning all the time. Anyway, when our flight touched down in San Francisco, we immediately noticed children in the airport, and more people with smiles. Maybe we’re nuts, but I think things are more relaxed on this side of the rockies.

Finally, we made it home! The kids were so happy to see us. I felt very appreciated by my babies. Aubrey shed a few tears, and said that we were never to leave her again. I felt a lot of guilt. Grandma and Grandpa were great, they took good care of them, and I don’t know how to thank them for that. It was nice to get away, but so sweet to come home. I think I’ll be writing a Thank You card to the company that paid for our trip. They treated us like royalty, took care of everything in a first class way.