Poor Tanner, Friday was not his day. I took the kids to school and when they got out of the van Tanner realized he didn’t have his backpack. He had is Nintendo D.S. though… hmmm. Anyway, I was very patient, it’s not like I’ve never forgotten anything so home Tanner and I went to get his backpack. Now the poor boy was late so I had to unload the girls and walk them into the school so that I could sign Tanner into school, I was still being very patient considering I had somewhere I needed to be. So Tanner went to school and I took Aubrey to preschool.
When we got home from preschool I got a call from one of Tanner’s friends moms inviting Tanner to go with them after school to a movie. So I stepped into Tanner’s room to get away from the noise of the girls so that I could chat for a minute, and there sitting on Tanner’s floor is his homework. The same homework that at breakfast he had assured me was safe in his backpack. Hmmm, what to do with the forgetful boy? Tanner doesn’t care for writing he doesn’t mind coming up with things to write, but the physical act of writing drives him crazy. So I decided to have Tanner write me a paper on being responsible, funny boy, here’s his paper. 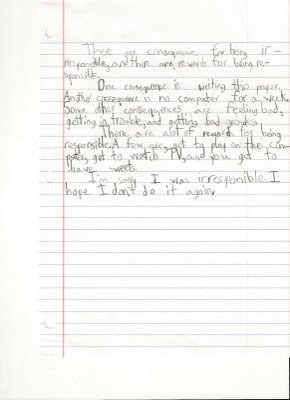 He was pretty upset that I made him write, I think I have found an effective punishment. I laugh at the part about him being able to have sweets… I don’t think I have ever told him no sweets as a punishment, I have threatened to serve nothing but broccoli for dinner before though.

One Comments to “Tanner's bad day”