Rewind with me to mid July, I tried to remember what weekend it was, but honestly they are all blurring together.  Danny and I were getting ready for the ward camp-out.  On our drive out there, I in joking told Danny that it’s never a ward camp-out without a trip to the E.R…. I never imagined that it would be us.  Aubrey was playing with one of those old fashioned water pumps and was getting a drink when someone else who was playing with her closed the pump, but her finger was in the way.  I was down by our tent getting dinner ready when I heard her scream, I knew instantly it was my child.  I also knew that it was no ordinary scream.  She ran to Danny who looked at it and quickly had a puddle of blood in his hand, so he took her back to the pump to wash it off and look at it.  I joined them at this point.  We made the decision to take her to the E.R. because the pad of her finger was cut on three sides, under the nail, down the side and across the bottom.  It was gross, she was crying.  On our way there we asked her if she could calm down enough for us to pray, and she was able to, and never freaked out again.  The nurses and doctors at the hospital were able to touch it, clean it, and glue it all back together without a single noise or jerk out of her.  She got back to camp and ran off and played capture the flag in the dark.  The glue didn’t hold even 24 hours, and it hung open for a week, but has finally healed up now.  In hind site, we should have insisted that they stitched it closed, but they didn’t want to remove her nail to do so.

Aubrey playing at the E.R. waiting to be fixed up! 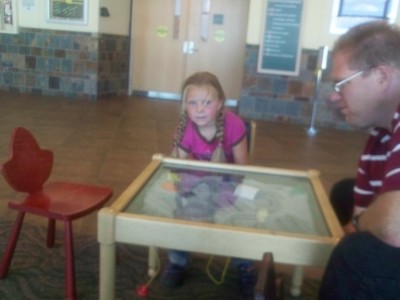 This has been a hard week.  I’ve had sick kids and Danny is out of town.  I thought everyone was feeling better today so I braved a trip to Lake Tahoe.  When we got there it was obvious that Aubrey didn’t feel well.  She laid in the sun, covered in a towel and slept all morning.  Then she vomited, and we left.  Oh well, it was the most beautiful morning at Lake Tahoe, temperatures were gorgeous.  My friend Shana brought her kids up too,  she has 3 boys who play with Tanner like a brother.  Her older boys took Tanner to the big granite rocks to jump.  He was hesitant, but they were patient and persisted with him.  This is something that I would have never been able to do with him, so I was very grateful for Shana’s boys, who by the way are hilarious and fun to be around.

Alyssa chasing birds.  This child is numb to all things painful, she was in the water before anyone else, outside temps were in the 50’s and the water, oy, I don’t even want to know. 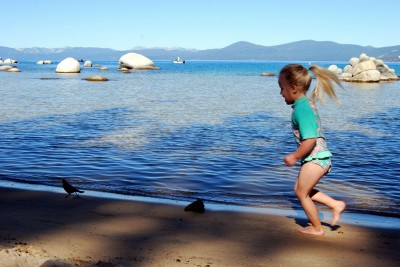 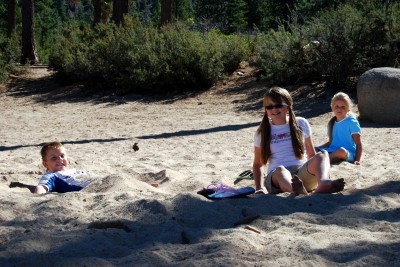 Tanner is the blond boy in the light blue and white shorts wearing the black and yellow life jacket.  Shay is with him, I’m sure giving him some tips; “now if you do this wrong you crack your head open and drown”, but I’m sure it was more along the lines of “you can do this”.  I had my doubts, I didn’t think he’d do it. 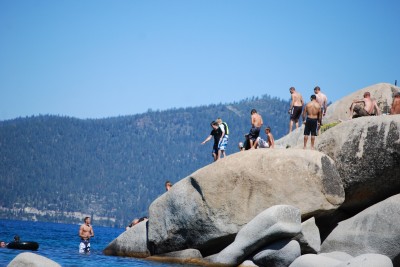 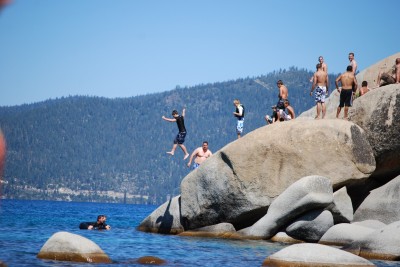 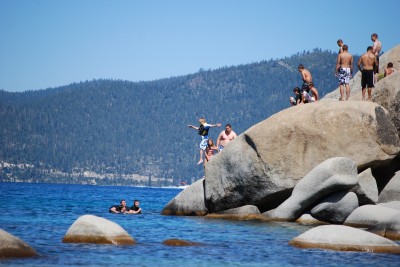 Take Two: This time Noble gives Tanner some tips Noble being older it was probably something like “the chics dig this man” 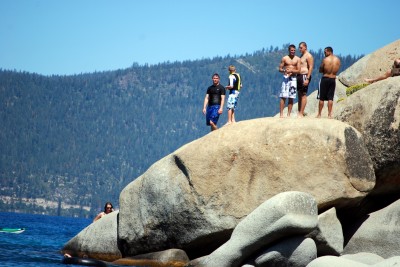 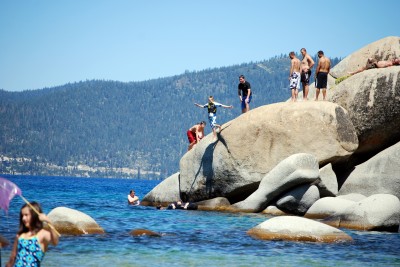 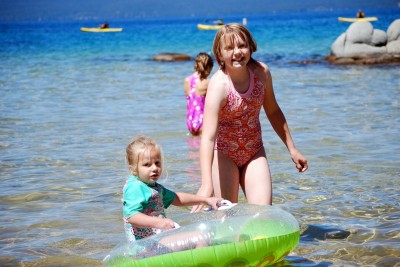 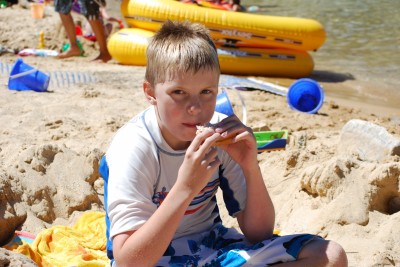 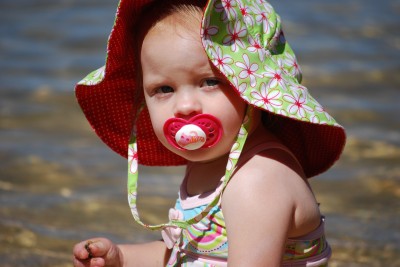 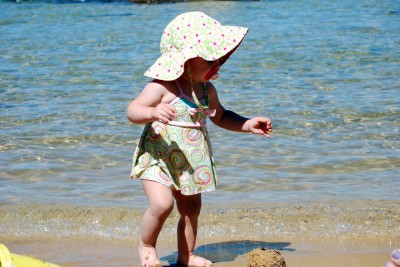 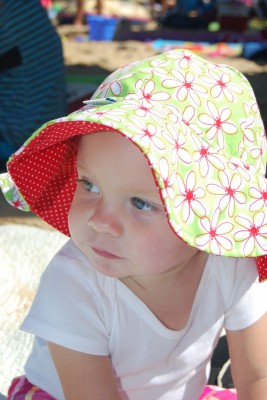 No pictures of Aubrey, she was asleep under a towel all morning.  Lake Tahoe is my little bit of paradise!