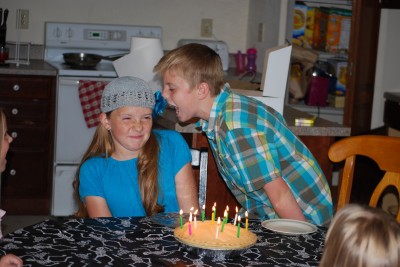 Life doesn’t stop, since I’m behind on my blog already I’m going to lump these two together in one birthday post. Seems like they have been twins since they were 2 years old and inseparable, I’m sure they wont mind sharing a birthday post.

Emma turned 13 this year. We have a teenager, for those of you who haven’t hit this great milestone, let me tell you… Nothing really has changed. She may have lost her sense of humor toward some things, but overall, it’s been a smooth transition. Emma is growing up so beautifully. I can’t wait to see what she does next.

Emma is a great big sister, I will catch a few beautiful moments of her interacting with her sisters, and she is so sweet and kind with them. They like to come into her room and look at her jewlery and “make up” and she will often put it on them and so kindly tell them they are beautiful. It brings tears to my eyes, to see her so strong in the gospel, she loves her Heavenly Father and is always striving to follow His teachings. We call her our little DilEmma because she strives to hard to follow every rule to the extreme and it often causes her dilemmas.

She’s been invited to take the ACT test this year as part of a college talent program, she will get the chance to take it and the SAT test every year now until she graduates. She’s excelling in her flute, and started private lessons recently to take it up a notch. Marching band is in her future next year in high school–ACK.

Tanner is singing Happy Birthday to Emma in the top picture. She requested lemon meringue pie, which I drove out to Amish Country to find. She just finished up a great season running Cross Country and took almost 3 minutes off of her time from the beginning to the last race. We love you Miss Emma! 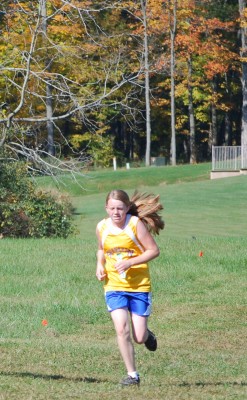 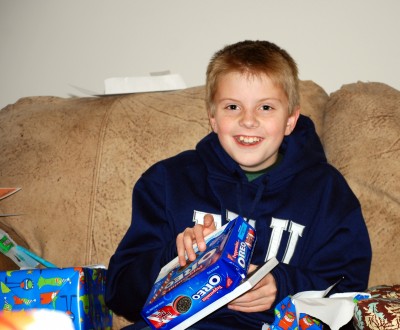 Tanner brings so much joy and screaming into our family. If I was supposed to have only one son, I couldn’t have asked for a better fit for this family. His sisters adore him and take good care of him, and he is really good at being a big brother. He’s loving, sweet, yet tough enough to make them all scream at once if he feels like it.

Tanner has also been invited to start taking the ACT tests and SAT tests, he will take his first one in February. He seems so young, but has some lofty goals. Although he is wearing a BYU sweatshirt, he really wants to go to MIT and go into robotics. I know things can change but right now this is his goal. He’s pulled all A’s so far in middle school. He ran with the Cross Country team this year as well, but couldn’t actually race because of his age. He’s doing well with his piano lessons, and playing everything less like a funeral march (that is his piano style we have decided). Music is not his natural talent, but I refuse to let him out of it.

This year Tanner wanted a game for the Wii, Smash Brothers. He wanted pumpkin pie…obviously my kids aren’t much for cake. Last year we spent his birthday with our good friends the Hamblins. It was our last day in Dayton, and instead of a celebration it was a bawl fest, so this year we pretty much partied the whole day for him. We picked him up from school and took him to lunch and then returned him to school. We were supposed to close on our new house on his birthday, but I moved up the date by a couple of weeks so that his birthday wouldn’t be part of a move again.

We love you Tanner! 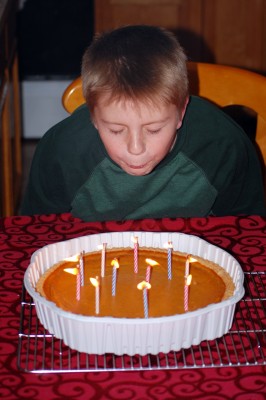 One Comments to “Two Birthdays”

1 year in oHIo No Excuse