Home » Uncategorized » So many things…

have happened in the past week or so since I have posted. It’s been a busy time with school ending and summer break beginning. I’ve been working on a schedule to keep everything and everyone happy and somewhat organized. Aubrey and Alyssa are so happy to have Emma and Tanner home during the day.
Lately we have had many trials regarding the Sabbath Day. We haven’t really had to set down any rules yet—with the kids being young they don’t really do anything we don’t do, and it’s been fairly easy. Emma has been doing a dance class to help her with her floor routines in gymnastics. She was very excited when her coach told them that they were going to be in a large dance competition on the 31st of May. We committed to the competition and paid for Emma’s costume, and Emma attended many extra practices and was looking forward to competing at the Lawlor Event Center in Reno. Emma’s coach contacted me on the Tuesday before the competition to tell me that she had gotten the schedule and that Emma was to compete on Sunday and not Saturday. I’d already talked with the coach in the beginning to let her know that Sundays were not an option at all for us for competitions, so she wanted to know what we were going to do. There was a part of me that thought well, this can’t be helped, kind of like the occasional days that Danny has to work on Sunday, or if we are traveling and we purchase gas on Sundays and that maybe I could make an exception. I decided to tell Emma and see how she reacted to the news. The first thing out of Emma’s mouth was we need to tell her that we can’t, and then as she thought about it, she started to cry and apologized to Danny and I for spending the money on the dress for the competition, but that she would not compete on Sunday. So I informed her coach who was remarkably understanding, and quickly re-worked the dance for the other girls and the show went on. I don’t think it was hard for Emma until she went to class that week and had to tell the girls. Most are older then her and many of the comments were “can’t you just miss church once” . Watching her talk to the girls, my heart ached for her, but she stood her ground, and in the end I was wiping tears from my eyes, as my daughter taught me a lesson. We kept the dress for “fun play”. 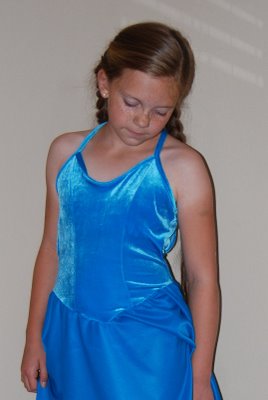 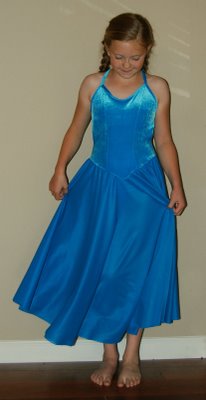 Another test of the Sabbath Day quickly happened, this time to Tanner. Tanner’s soccer season has come to an end, and they have had a good run, I don’t think they lost a single game. Tanner’s coach let the parents know that the end of the season bbq would be held the Sunday following the last game. I once again wavered in my thinking and thought well, it’s not ideal, but it’s after church. I started to think about “is a family bbq ok on Sunday and if so why not a bbq with friends?” I came to the conclusion that part of the problem is that there would be clapping and cheering and partying celebrating soccer and not family, and knew that it was something we would not be doing. Reverence would not be a part of a soccer bbq, although I’m not sure my kids are not always reverent on the Sabbath. Anyway, on Friday night, I just casually mentioned to Tanner that his soccer party was to be on Sunday, he said nothing, which is very like Tanner, and he went to bed to contemplate. I didn’t say anything to him on Saturday, but after the game the coach said to the kids if you aren’t going to be at the party tomorrow come and see me so you can get your trophy and pictures. I watched from a distance to see what he would do. Tanner marched up to his coach and told him he wouldn’t be at the party because it was on a Sunday. His coach came over and talked with me and I confirmed what Tanner had said, he was quite surprised because we support everything. He took Tanner to his truck and got him his trophy and picture, shook Tanner’s hand and told him he was proud of him and that he had a great season. Tanner quietly got in the van while I gushed over the trophy hoping to break the silence. Tanner told me he was sad, but that he knew he had done the right thing. My heart ached for him, I knew it wasn’t an easy thing that he had done. Tanner’s coach is wonderful, hopefully he’ll not hold the future bbq’s on Sunday. I’m very proud of those two kids. 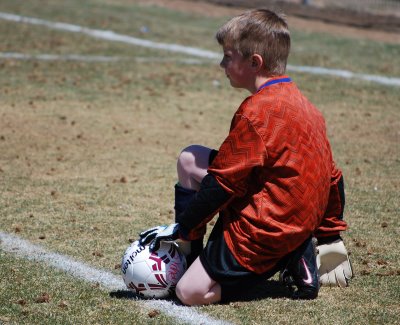 Alyssa now has enough hair for pigtails and is growing up quickly. As for her vocabulary, she can very clearly say Mommy, Daddy, Tanner, Emma, Aubrey, brownie, strawberry, Jazzy (dog’s name), and well, many more words. She is a bit of a climber, and is getting good at getting into trouble. She has a thing for markers and skin, and is developing a little bit of an attitude, but we still love her to pieces, it’s just the time to be consistent and not a lazy parent… sigh. 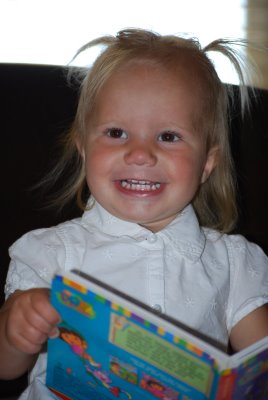 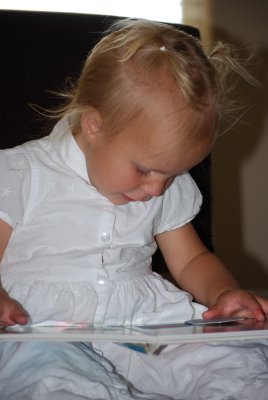 We had a movie night to celebrate the last day of school. This time we invited some friends to come and celebrate with us. We watched a Harry Potter movie with them, but it doesn’t get dark until almost 9pm so we ate dinner, and shot a bb gun in the back yard, and just had an over all fun time. It got pretty cold that night, so we didn’t make it through the whole movie, we’ll have to do it again as it warms up a little bit. The temperature here can swing drastically it can be almost 100 in the day, but still hit the low 50’s at night. I like it because it brings a pleasant relief to the hot days, but if it’s only in the 80’s during the day it can drop to the low 40’s and that is just too cold to enjoy a movie. 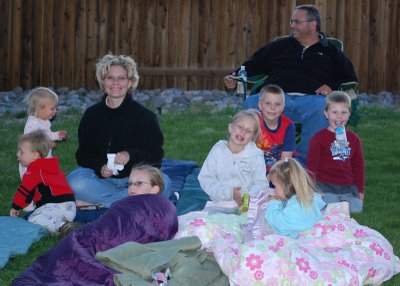 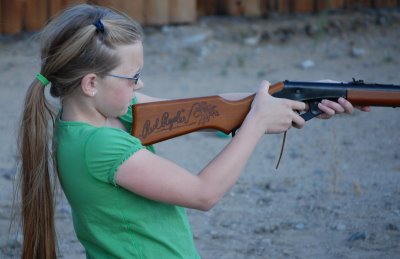 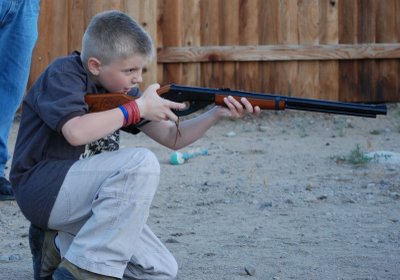 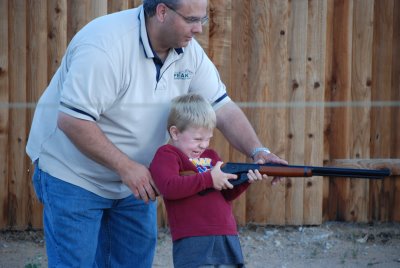 Lets see what else need catching up on… Oh Tanner and Danny went to a Father’s and Son’s camp out that the ward put on. They go every year and have a good time. As for us girls we got a pizza from Costco and met some friends at a park, and then we went up to Claires—a real girlie store that I detest so we never go there—but for Emma we did this once. Then we wandered over to the book store and to Old Navy. Emma had invited a friend to join us and they were so funny at Old Navy, they were trying on jackets and pretending to be models. She’d never do that with just me, it was fun to watch her “play” with her friend. After that we dropped Emma’s friend off at home and watched the BBC version of Narnia…hmmm, not the best made movie in the world.
The boys had a good time. Danny didn’t set up a tent this year, Tanner has been into survival mode since he finished reading Hatchet, so they built a lean-to, and slept in that. I’m not sure how much a lean-to it really was, considering Danny couldn’t cut down trees at the campground, but they did the best they could with what they had. I guess the next day they played in the river and the lake, and headed home. Tanner fell in the river fully clothed so he came home in his swim suit… go figure. 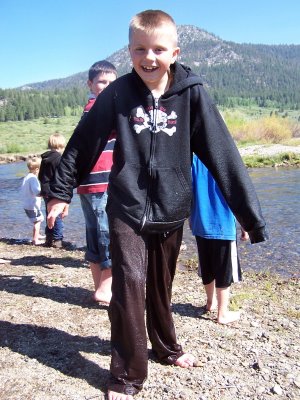 The ward provided marshmallow guns and I guess they all went out into the field and blew marshmallows at each other. Danny informed me that the boys were then picking the marshmallows up and eating them… ewww. They found a snake at the camp and played with it until it bit someone, I guess these are some good reasons why Moms aren’t there, I’m not sure that I would have wanted to play with a snake. 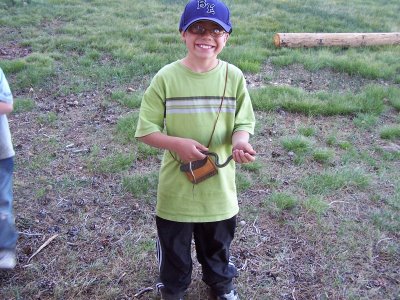 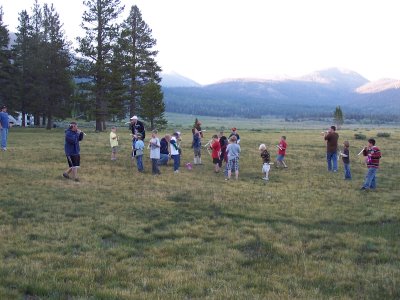 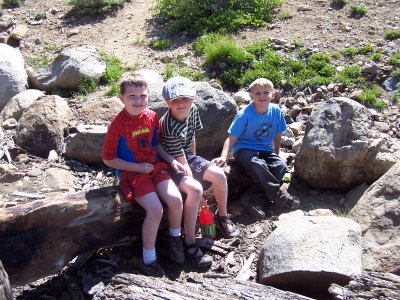 Tanner and some of his friends!

Well, I think this brings me up to today. It’s Father’s Day, and I am so thankful for my sweet husband, he’s such a wonderful father. The kids made Danny breakfast in bed with a little help. We made scrambled eggs with spicy sausage, blueberry waffles, with whole blueberries on top. We all ate in bed with him. We bought him some Almond Rocha, his favorite candy and I gave up the Sunday paper to him…that’s big because I don’t share my Sunday paper very nicely.
Tanner was asked to speak in Sacrament meeting today, he couldn’t have been cuter. He spoke about his Dad and how he throws snowballs with him when hiking and builds Legos to the ceiling with him. I had Tanner write it himself, I thought it would be more meaningful that way. It was a nice talk, and I’m proud of his courage to get up in front of all those people and give a talk.
I need to put a little plug in there for my father. He has taught me so many things, and I love him so much. Thanks Dad for all the sacrifices that you made for our family. Thanks for taking me shooting, fishing, and for all those car fixing projects (those I didn’t enjoy as much). Thanks for making me tough, and for all the vacations that I’m sure you were less than excited to go on, but did anyway. I loved the Grand Canyon, and I loved the hike to the Emerald Lakes in Zion’s. Thanks for teaching me how to work, even when I don’t feel like it. I know you came home from work, often tired, and in pain, but you always had the time for me, and I know that you loved me.
I think this brings me current, I’ll try harder to post more this week that is if anyone is actually reading this.