Every year our ward holds a trunk or treat a week or two before Halloween. That is when the chaos begins. I really don’t mind Halloween, it just that they have to do costumes so many times. The day Nevada became a state is also Halloween, so in the past they have actually moved Halloween to accommodate Nevada Day celebrations. Recently they passed a law that states that Nevada Day will be celebrated on the last Friday of October, which this year happens to fall on Halloween. So there is no school on Halloween, so I have to get the kids in costume on Thursday and then again on Friday for Trick or Treating. So the trunk or treat is just the beginning of the season of Halloween. When I was a kid, we had Halloween on Halloween, we dressed once, and then it was over. The kids have to make a run into Danny’s office on Thursday for his work party, and they come out with more candy there then when they trick or treat, it’s just amazing how much candy they get. I’ll stop being a scrooge now and move on to some cute picture of the kids in their costumes. The Trunk or Treat was fun. It was combined with the other ward here in Dayton and it was fun seeing the other families that we used to work with when we were just one ward. We had chili and corn bread, and then the candy began. 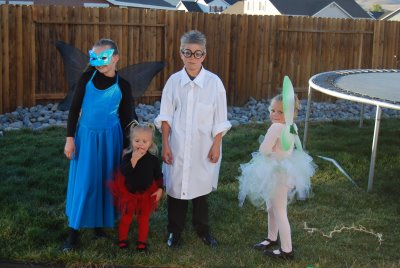 In case you can’t tell, Emma is a butterfly, Tanner is a mad scientist, Alyssa is a lady bug, and Aubrey is Tinker Bell.

3 Comments to “Trunk or Treat”