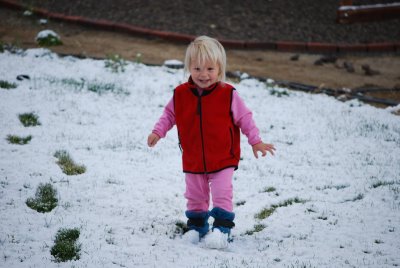 Snow in Dayton before we left

Why is it whenever I attempt a camping trip we get snow. If you look back, our trip to Yakima– snow! Hope Valley– snow! I thought this trip to Yosemite would be canceled because of the snow. They closed Tioga Pass on Friday, and we have driven all the way around in the past, but I didn’t want to endure that drive, so I told the kids our trip was cancelled. When we got home from church on Sunday, I checked online and they had opened the pass as of noon on Sunday… so off we went.
We arrived in Upper Pines Camp at 7:30pm, and started setting up the tent in the dark. It was far colder then I was expecting, and spirits for me were low, the kids were excited to be out of the car, and were given freedom to get dirty.

Five minutes after our arrival a Ranger came up to us and told us that a bear had just been in our camp, and was now just sitting 100 yards from us. He said that her cub was up in a tree behind us and that we needed to finish our business and get our bear box locked… Great!
The first night dropped into the 20’s, and we were all chilly. Alyssa had an accident on her green blanket, so we were without her comfort, and then there was that bear issue, things were looking bleak. Of course none of this seemed to affect the kids, but I was looking at those hotel lights wishing that we’d gone that course instead of camping. I’m the weakest link.

Tanner was a trooper he got up in the morning with Dad to start the fire, and get some hot chocolate made. It took a little more persuation to get the girls out of the tent, but eventually nature called and we all got up. Alyssa thought we were nuts and just kept asking to go home, finally the morning warmed up and she was OK with the world again. We hung out in the valley on Monday, and did some small hikes, and sight seeing. We played down in the river, where Tanner and Aubrey fell in, Tanner was trying to save Aubrey, although the river is less then a foot deep and I don’t think she needed too much saving, but they were both wet. 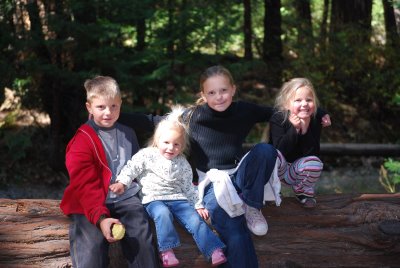 The thing I love most about camping is that the kids have so much to do. There are downed trees everywhere, and giant granite rocks, lizards, and streams, just endless things to explore. The kids found a rather large rock and spent an hour climbing to the top and sliding down the side. We had a family from Asia ask if they could take their picture with us… it wierded me out. I was thinking they were going back to show how fat Americans are… but Danny said they were probably just fascinated by a large american family… I still think my answer applies here. 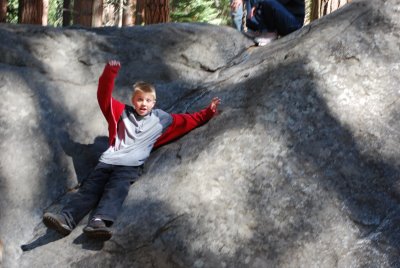 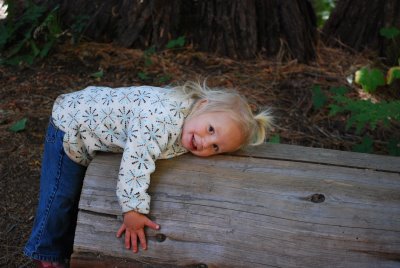 Our second night was a little warmer, and I managed to get Green Blanket cleaned, so we were back in business. We all slept fairly well, at least better then the first night. We had another bear encounter on our second night. We had spilled some bacon greese on the table and a bear scratched at the table trying to get the greese, until a ranger scared it off.

We took a hike to Taft Point and discovered Dad doesn’t care so much for cliffs 3,500 feet in the air. We had to keep tight hold of Aubrey and Alyssa. We had lunch up there, and then headed back. 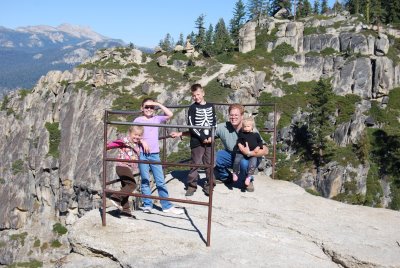 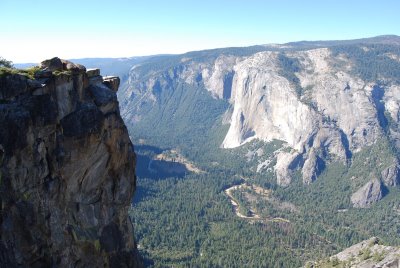 Tuesday night was warm, well, warmer then the 20’s, so I thought we were in for some good sleep, but Tanner got sick and lost it right outside the tent. Thank goodness it was outside the tent and not inside, but then I was stressed about the bears, coming right up to our tent to eat well… what Tanner lost. So Danny did his best to scoop it all up and move it away from the tent. Luckily there was no bear that night, but I was up quite a bit listening for one to come.

Wednesday we headed for home. Before I had kids, and it was just me, camping was fun, a challenge, exciting, but now, I must sum it up with the word miserable. Danny and I talked about how having kids have changed us both, but not in important ways. So I don’t enjoy camping so much anymore, is there really an eternal problem with that? It’s always my idea to go camping, I used to really enjoy it, and I will continue to camp for the children, but someday, when it’s just Danny and I and given the choice, that hotel in Yosemite is going to look very tempting. I’m greatful for a partner who is willing to move vomit, face the bears, and in general take good care of us.

OK, I think I can do it this time… Tutu's, Dumplings, Preschool, Birthday and Soccer