Poor little Hallie is sick.  This is a first for her so I’m counting myself lucky.  I swear I can smell an ear infection, so now I need to decide if I try and let her fight it, or if I just take her in and get it taken care of.  In the past I’ve had the most luck with letting them fight it.  Aubrey had horrible ear infections.  The doctor put her on antibiotics every time, and they eventually came back.  Finally I told the doctor I just wanted to watch it, and she was game to try, she never had another ear infection.  I hate seeing them so sick and miserable.  She spent most of last night sleeping either on my chest or next to Danny. 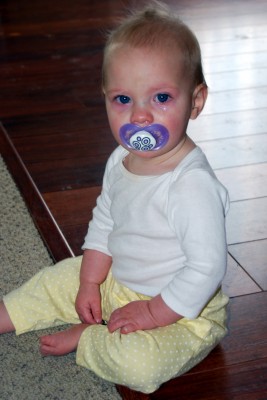 What does this say about my girls?  Why can’t they just play with Polly dolls the right way? I’ve been finding these all around the house the last few days. (The baggies are filled with water) 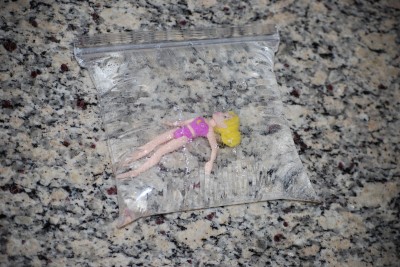 I put my first quilt binding on the other day.  I was very nervous about it, and have been putting it off.  The last time I attempted a binding it turned out so horrible, I left half hanging off and hucked it in the garbage I was so frustrated with the whole project.  Alyssa dug it out and has taken a liking to it so I cut off the hanging chunks and gave it to her.  I asked a friend for some advice, and she told me to pin.  So I pinned, and pinned and pinned, using every pin I owned, sewed very slowly and it turned out mediocre if you look closely, but from a distance not too bad.  Now someone needs to teach me the trick to mitered corners.  I would like to try a little more complicated quilt also, but baby steps is the only way I seem to learn, one thing at a time. 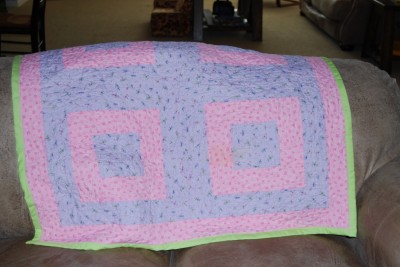 I have mentioned in a previous post I’ve been on a skirt kick.  I finally got one pretty close to perfect the other day.  It turned out so cute.  I tried to get a picture, but there was no cooperation on the end of the unmentioned child.  For some reason she seems to be allergic to the sun and her eyes wouldn’t stop watering even though she was in the shade.  I didn’t want to get frustrated right before church so I let it go.  I’ll get one next week even if she is crying in it.

Now I just need  a sewing work station, I’m getting tired of cleaning up the dining room before dinner every night.

4 Comments to “Catching UP”

Easter Kidism for the day