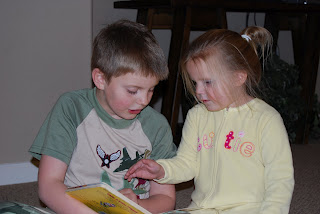 Last night I was still not feeling well when Danny got home from work. He suggested that we go out for dinner. We went to a local casino, the food was… ok, nothing to get too excited about, but the kids were at their best. We talked, joked, and just enjoyed each others company. The mood continued when we got home. Tanner read stories to Aubrey and Alyssa and Emma has been working on playing “Because I Have Been Given Much” on the piano and has just about mastered it. That is two hymns she can play now, I just burst with pride when I hear Emma play the piano. That is something I have always wanted to do, and I will when I’m not occupied with other important thing like Alyssa and Aubrey. Tanner is doing well on the piano also, but Emma has had a year and a half of lessons now and Tanner has only had 6 months of lessons, so he has a ways to go. I’m proud of him though, because he wants to play so badly and tries with all his heart. Anyway, I wish I’d gotten a picture of it, but Tanner read Aubrey to sleep last night, he loves to do that. He’ll come in and tell us that we need to move her because she’s fallen asleep in his bed. I love seeing my children love each other.
Well I made it to the gym again today. I really do love going, I just want instant gratification. I’m that way with lots of things, hopefully this time I’ll learn some that things that are worth it take a lot of time. I’m still staying away from the scale, although the one at the gym today was calling my name. Good thing it is out in public, wouldn’t want anyone to see what I weigh. We live in too small of an area, there are at least 5 people from my ward working out at the same time that I am. That scale can call as loud as it wants, I wont be getting on in front of all those people, and I don’t know where Danny hid my scale… sigh, I just need to be patient.
I caught a few pictures last night of Tanner reading books to Aubrey, but once I brought the camera out my little model had to pose, so I had to put it away.

A much better weekend Yucky weekend