I try hard not to over schedule my kids. I do require that they take piano lessons, I guess that is my thing, but neither of them complain. I let them each choose one sport, but I can see with four kids how that might become a problem in the future if they all choose a different sport. Anyway, soccer has started and Tanner is all fired up. His first game was this Saturday, the day couldn’t have been more beautiful for a game. We all got a little sun and are looking all a little sun kissed.
Tanner plays goalie. I can’t believe how nervous I get for him when a ball is coming his way. I know the team counts on him, and it is a lot of pressure for a little kid. His coach plays him as a forward when the ball is mainly on the other end of the field and Tanner isn’t getting much action in the goalie box. He looks so cute in his uniform though… 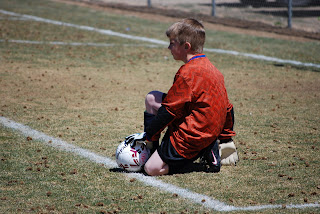 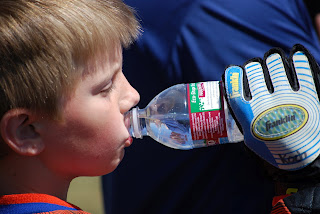 Emma changed gymnastic coaches this week, and I’m hoping it’s a change for the good. She is now doing gymnastic practices for 4 hours a week, and seems to be loving it.

Our fence is still on the ground but we did get some peas in the ground this week. I guess the fence will have to be next weekend. We are just having a hard time getting the wood posts home without a truck, but we have a neighbor who works in Carson City next to Lowes, so I’m going to ask him to meet Danny there at lunch this week so we can get the large posts home.

We went to dinner at a friends house tonight, they are a little older then us and have teenager children which is delightful because they have been where we are but their children are usually more then happy to help us with our children. We bbq’d and just sat around and talked. We have come to love a lot of people in Dayton and have a great ward family here.

Danny has been given a new calling. He is now Sunday School President. So I guess he is moving on and leaving me in the nursery. I was told that I was being released in a couple of weeks, but they couldn’t tell me what until they had found a replacement for me. I have actually come to enjoy the nursery, the kids at least, I struggled a little with other issues of the nursery, but will truly miss the innocence of the little ones. 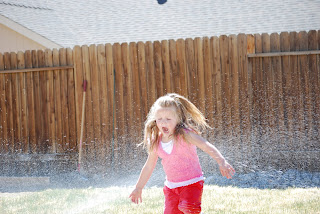 Aubrey mastered writing her name this week. She has had the AUB part down for a while, but this week mastered the rest of it. I thought it was cute how she added little lines at the tops of the Y. That is how the Y looks on a little cut out of her name that is taped to her dresser. She is obviously studied it, and copied it pretty closely.

Some funny things that Aubrey does: She loves to give gifts, mostly strange things that she finds around the house. She will completely cover the gift in tape and tape it to a piece of paper. It will take her an hour to tape it all up to the point that you can almost not even see what it is through all the tape. She will do this to flashlights, and other large items. There’s a part of me that thinks I should stop her, but she is so intent on what she is doing, and she isn’t meaning any harm. She can lose herself in a taping project for over an hour and hardly realize anyone is anywhere around. So if anyone wants to know what to get Aubrey for birthday, Christmas etc… tape, and more tape. I am officially out.
Yesterday we were getting into the van and Emma was in her way. Aubrey yelled out, move it Emma your holding up traffic. Yikes, where did she learn that.