Home » Uncategorized » A camping we will go

A camping we will go

26 May 2008
We knew that the weather was going to be bad. The predictions were for rain and cool temperatures, so we packed accordingly, but it seems like I’m never prepared enough.
Anyway, I’ll let the picture do the talking. 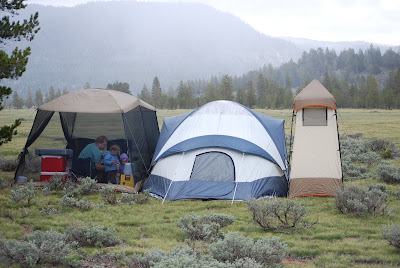 Castle O’Barr
The little tent to the right is our potty. 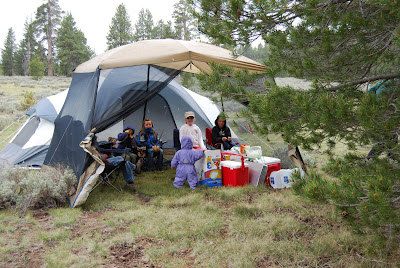 The weather held out just long enough to get everything set up and then the snow started falling. You can see a few of the flakes if you look closely in this picture. 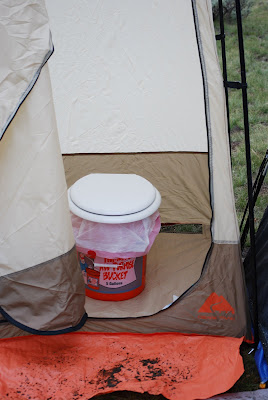 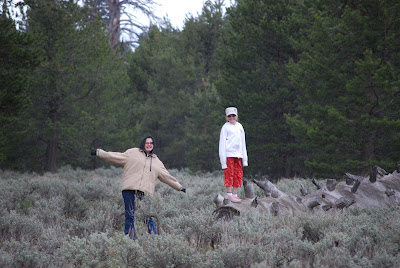 Emma and her friend Devree 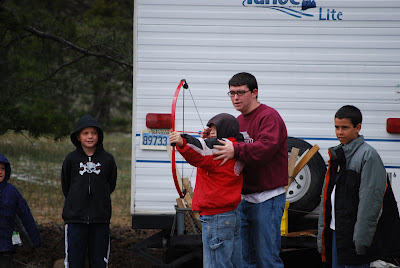 Noble was helping the boys with the bow and arrows. Everyone was getting a good laugh at Tanner because he’s never shot before, but would do a little butt shaking dance, and let it fly and hit the center of the target every time, maybe I should look into archery lessons for him. 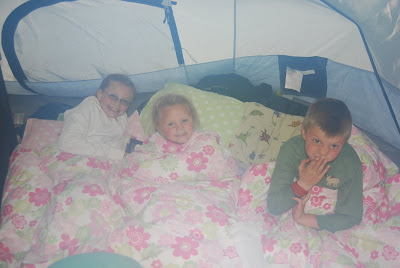 Waking up the first morning, the lens was fogging up. We all slept well but it was cold. When Danny went outside to take Aubrey potty, Aubrey saw all the snow, and said “HOLY MOLY” She had no idea it had snowed. We laid in the tent for a long time that morning and sang Christmas carols. 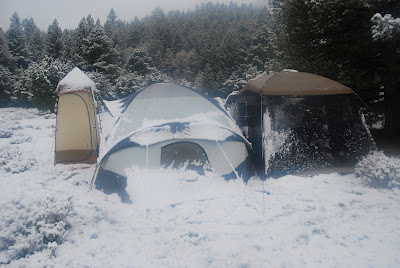 Our first morning. We ended up being the only family up there in a tent, but we stuck it out. One family left after the snow storm, but they weren’t feeling well, who could blame them. Going potty was miserable. 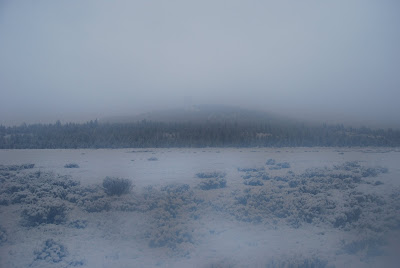 We were a little wimpy, we took off for the morning and went into town and saw Prince Caspian. Then we headed back up to the camp and went fishing. Danny had bought a California fishing license for the day and he didn’t want it to go to waste. 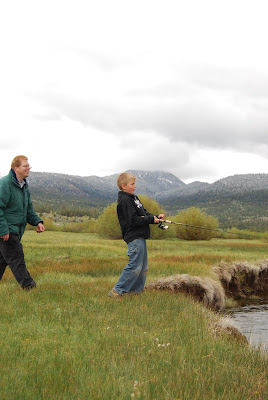 By the time we returned to camp the snow had melted, and we had a great afternoon down at the river. We didn’t catch anything, which actually relieved me I didn’t want to eat fish, so we roasted hot dogs over the fire. Rhonda, made a delicious Rhubarb Crisp that she shared with all of us. Tanner told a ghost story and the snow started up again, so off to the tent we went. 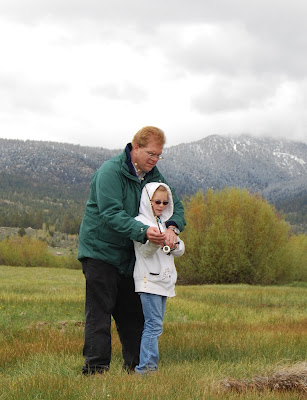 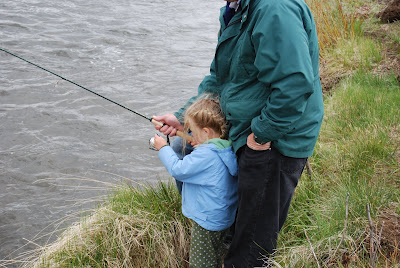 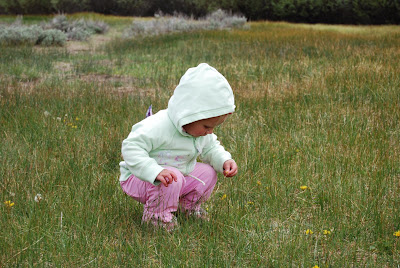 Alyssa down at the river. She picked flowers and ate lots of trail mix while the kids fished. I spent most of my time keeping her out of the river. 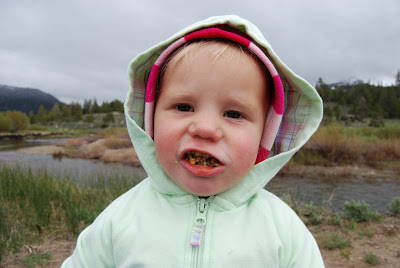 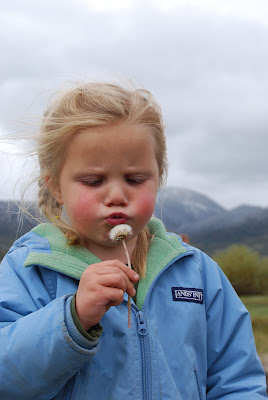 Playing at the river! 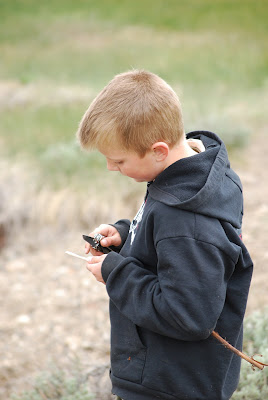 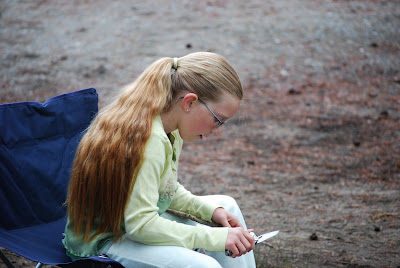 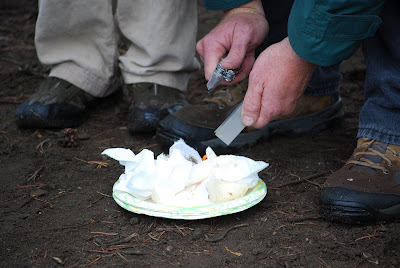 Danny’s lesson on how to start a fire using flint. 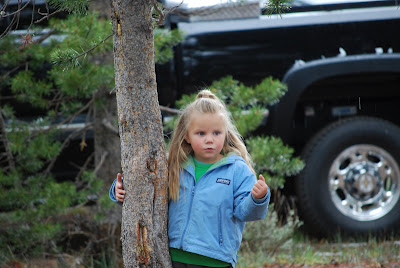 “Ready or not here I come.” There were a lot of kids camping with us and they got a game of hide and seek going. That always worries me a little I’d hate to have Aubrey hide and then not be able to find her, but she was being good and was having too much fun for me to stop the game. 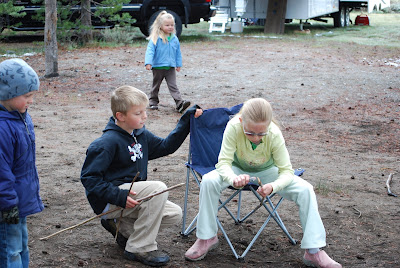 Emma and Tanner working on their spears. Tanner and I just finished reading Hatchet and he was thinking he could spear a fish, reality set in pretty quickly. 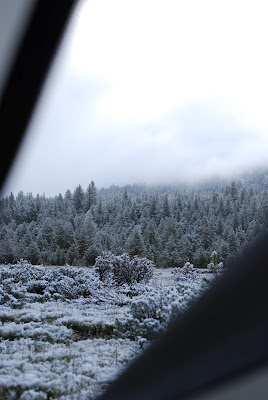 I unzipped the tent on morning 2 and quickly took a picture. We got up with hopes of things warming up like they did yesterday, but it never happened. I went into my friends trailer while Alyssa napped and played a game of Phase 10 with the ladies, and Danny and the kids played out by the fire. it continued to snow and rain all day and I decided to call it quits about 3pm. I knew laundry would be brutal, and so we packed it up and headed for home. It was nice sleeping in my own bed last night. I want so badly to be tough, but I’m committed to more camping trips this year, maybe in a warmer area. Hope Valley, California

One Comments to “A camping we will go”